Fantastic! You’ve Used all the Bits, but Your Multimodal Project is in Another Box

by Alec Pantaleoni on April 14, 2017 in Uncategorized 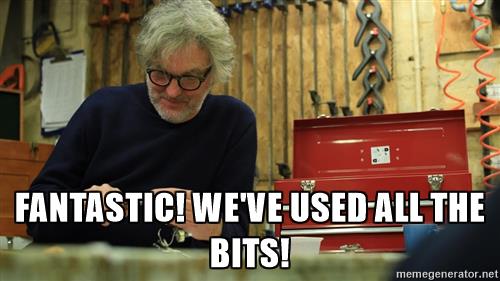 Some of you may not have heard, but my original idea for this project was to create a Reassembler-type vlog where I assemble a Lego Technic Race Kart (#freeplugparty) whilst talking you through it. The idea was to show what it is really like to build something of moderate complexity, and possibly impart some interest unto you. When I watch James May put random shit together (I have attached an episode for your viewing pleasure), I find myself getting unusually excited when he is putting on the finishing touches. As someone who builds models, I can totally relate to him because I feel the same sensation when I put that last piece on a Gundam. The satisfaction is biblical. Naturally, I would hope that you would feel the same. You waste 30 minutes of your life watching some sweaty fat guy put together a children’s toy, so naturally you would want to see it through to the end. Alas, while the idea sounded good on paper (to me anyway), execution was impossible. I did not have the requisite equipment nor did I have any editing know-how. It took me about six hours to assemble the 345 pieces of the go kart, and frankly I do not see how I could edit that down to 30 minutes. So, in lieu of a vlog, I will decide to play to my strengths and create a visual presentation of some sort. The jury is still out on whether this will be a PowerPoint or a Prezi, but I am leaning towards the latter. By the way, the video I have included is one of my favorite episodes of The Reassembler. The entire run time is devoted to the reconstruction of an old-as-shit telephone. I STRONGLY dema…encourage you to watch it. Watch it for entertainment or, you know, an insomnia cure.

3 comments for “Fantastic! You’ve Used all the Bits, but Your Multimodal Project is in Another Box”